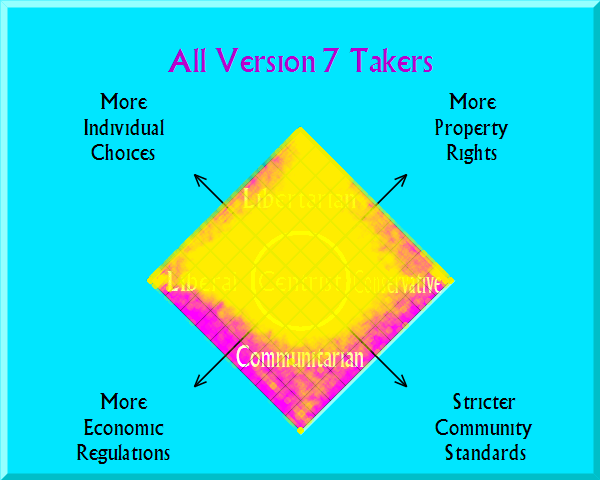 After years of neglect, I have finally gotten around to doing a tally of the quiz stats.  Not quite 120,000 points.  Traffic has definitely gone down since the glory days of this site.

But also: the site’s recording mechanism had been broken since January 2019 due to changes in PHP and my hosting provider’s Apache settings. Oops!

Hopefully, it should all be working correctly now.

In other news: quiz2d.com is now https! No more browser warnings when filling in forms. The Web is  more secure.

Have a look at the latest statistics for Version 7 of the Quiz. We are now up to over 52,000 takers! I would say that the statistics are significant, save that they are a bit biased. You can see the bias in the scatter plot:

A large fraction of my traffic these days comes from school sites. Sex, drugs, and rock ‘n roll are a lot more appealing if you are a teenager than if you are a parent of a teenager. I think this explains most of the bias to the upper left.

Then again, it is also possible that the government is biased to the lower right compared to the population. I center the diagram on the amount of government we have today vs. any attempt at finding an average or median viewpoint. Whereas a democracy is supposed to reflect the median in theory, in practice we have Gerrymandering, a two-party system, and a funding bias towards towards incumbents — i.e., bribery.

There are more people at the upper corner than at any of the other corners because the Nolan Chart is a projection of a higher dimensional space that makes libertarianism appear a more coherent political philosophy than others. Other projections are possible. The Political Compass uses a different projection which measures how libertarian you are not at all, but does measure how much you agree with a certain hard left political philosophy.

One of these days, I’ll get around to making quizzes with different projections…